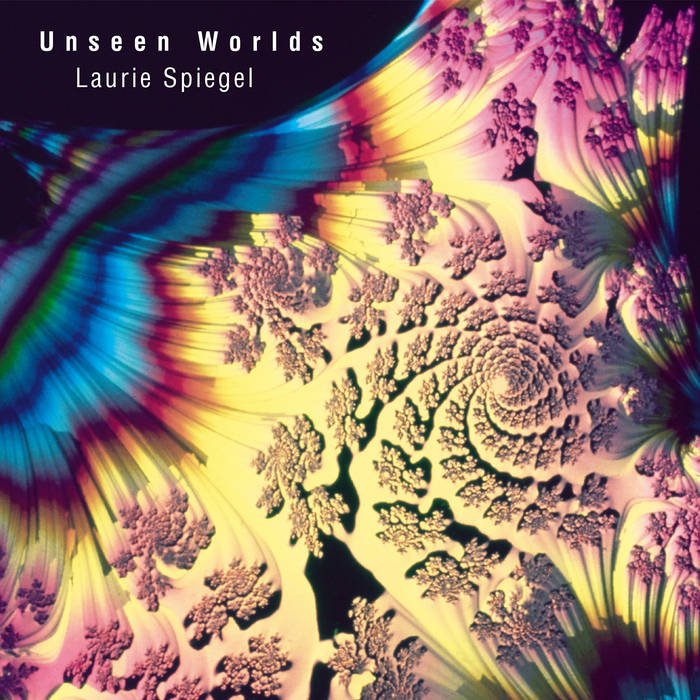 Mike DeRoitr This 2xLP tells the story of the formation of a universe behind the eyes; the genesis of the cosmos, a rock begins to orbit a star, life erupts from beneath the ice, the birth of a green new planet. Contemplative stuff... serious thinkers only. Favorite track: From a Harmonic Algorithm.

nicholas hamnett Though it can be emotionally scary in places, in a dreamy, yet mind-expanding way, I'm finding Laurie Spiegel's Unseen Worlds calming and meditative. It is only my third album of electronic music, after The Expanding Universe, (which I've yet to get on vinyl) and one by Delia Derbyshire, whose music I also find very meditative.

I did have a collection of Gary Newman records back in the early eighties (or last Century, if you really want to make me feel old!) when a lot of us, briefly, felt electric. Those records were long ago sold on, probably for a couple of packets of fags, and I've little ventured into this genre since.

My very first introduction to electronic music, like many of my generation, was through the sounds of Delia Derbyshire. I remember asking my dad, after first watching Doctor Who in nineteen-sixty-something,
what was making the strange
noises of Ron Grainer's mindblowing theme tune? In a rare, "child centred" and accommodating moment, he told me..."Well. It's a kind of electronic box. One with wires and lots of dials and buttons." I remember, I thought about that for days. An electronic box! Making music! An incredible idea!

That was in the days you must remember before even the first pocket calculator was launched, never mind something so fantasical as the Internet!Kids got their fun back then through flesh and bone things like apple scromping, camping, footy in the street.Electronic Social Media was Sci-Fi.

When I thought of electronic music as a teenager, I thought of Mr Spock: "I feel a strange sensation, Jim! Indeed my efferent nerves are signaling my muscles to an odd kind of movement; I do believe my action potentials wish to actualize to this sound!"

These thoughts, and thoughts of first seeing Kubrick's "2001 A Space Odyssey," were what hit me, as I first let Laurie Spiegel weave her mechanical magic on me.Kubrick's "Space Odyssey" had mesmerised me at the time, especially the "event horizon" sequence, set to so memorably to György Ligeti's music, "Atmosphères." I didn't understand the film then, as I don't fully understand it now. But that is how SpaceTime is.Potentially limitless and probably, unlimately, unknowable (certainly for this mere spec of Astral Dust of the race which considers itself the beating heart of eternity).

Laurie Spiegel's music, like Kubrick's film, gives you a great sense of the vastness of Space, both outer and inner. But it also gives you space to think about Space.It gives you the room, and the stillness, to breath the air of the places she has set up for you to explore. Something many Hollwood movies and a lot of TV drama fails to do these days and should.It's an odd thing to say about a work so full of sound, I know, but good art, of any kind, is like that: chocka, yet endlessly roomy.

Sci-Fi-wise, the dumb, cowboys and indians pantomime that is Star Wars is still in the ascendancy. An anthropocentric Space, reduced, unsurprisingly, to God (the Manichaean "Force") and a gun fight.Even Doctor Who is almost completely obsessed with sexual politics in the Tardis and traversing the dimensions of the human identity navel of the here and now than it is about exploring alien cultures and those eternal SpaceTime mysteries of its original programmes.
Though, in fairness, that is only fullfilling another important role of good drama, that of reflecting ourselves and our own human concerns, if only from a singular point of view.

Laurie Spiegel, on the other hand, stimulates a more expansive, ego-free, type of thinking.This is, as she called it herself "The music of conscious existence" which is not simply, I'd argue, about our own identity constructs, but also about the scientific matter of our Cosmic context.

My mind can be quite creative at times, but unfortunately, depression can sometimes lead it to paint the bleakest pictures. I find this music helps with that. Laurie Spiegel, for me, can be better than an hour with a therapist. (If a shrink ever tells you to tap yourself and repeat "I love myself! I love myself!" as a mantra - seek help elsewhere.If a doctor holds his hands aloft and declares he is a Christian and that the treatment you need "is to believe in God!" tell him he is a disgrace to Hippocrates and the entire medical profession and that he should be struck off for, as Aristotle said not observing his propper rational function. Finally, if anyone tells you to "Man up!" tell the imbecile to f**k off! - such folk suffer from a phenotypic plasticity abnormality: their heritage and upbringing having turned off their empathy genes as well as their brains).

Perhaps only an avant garde dance troop would be moved to shake their bodies to Laurie Spiegel, but for the rest of us, her music could make a splendid alternative to the chiming of Bonshō bells or the spiritual strings of the sitar during a good massage.This is pink noise, for those who like the sweet spot between order and chaos.The great jazz example of that being Miles Davis's Bitches Brew.The perfect piece for a broken pysche!Though, as Unseen Worlds is darker and more emotionally challenging than The Expanding Universe, the latter may be a better choice when seeking the transendent, for most.

When I need someone else's thoughts to ponder with my music, it would still have to be the songs of Townes Van Zandt that I put on. But when I next want to relax, in a contemplative way, and just to let my own thoughts wander outwards. I'll think about putting on Laurie Spiegel. You may think about something else entirely than the Space related thoughts I had here, or you may not be moved to think about much at all. But you should definately think about buying Unseen Worlds and The Expanding Universe. Favorite track: Riding the Storm.

Derek Power I'm very pleased this album has been made available again after twenty-five or so years. Like with TEU, there is harmony between various contrasts but this takes it to another level. Favorite track: Strand of Life ("Viroid").

Laurie Spiegel’s second full-length album, Unseen Worlds, arrived just over ten years after her debut album. Having realized the pieces found on The Expanding Universe (1980) on an instrument no longer available to her, the GROOVE System at Bell Laboratories, Spiegel moved on to composing and developing for the Alles Machine, alphaSyntauri, McLeyvier and various other instruments before creating an instrument entirely her own. Spiegel created “Music Mouse - An Intelligent Instrument” on a Macintosh 512k so that she could have an instrument that was not general purpose but a small, specialized, and well defined musical instrument for and by her that she did not have to compromise on or risk losing access to it. While it was a very personal instrument for Spiegel, demand among friends and colleagues nevertheless grew until “Music Mouse - An Intelligent Instrument” became a commercial product for the Macintosh, Amiga, and Atari personal computers with a devoted popular following that continues to this day, despite the obsoletion of those platforms. At the time of her Unseen Worlds album’s original release in 1991, the issuing record label turned out to be going out of business, dissolved and disappeared, sending the album immediately into obscurity. Outside of a private CD edition issued by Spiegel on her own Aesthetic Engineering label in 1994, this new edition represents the first proper commercial release of Unseen Worlds.

“Unseen Worlds is not so much based on melody and rhythm as it is on textures, pulses, and sonic environments. Sometimes dark, sometimes light, its drama pulls in the adventurous listener who wants to take a musical journey. Using computer software she wrote in order to implement a unique musical vision, Unseen Worlds blends the artistic and the technical, the cerebral and the sensual, and revives the virtually abandoned tradition of electronic music. Unseen Worlds is the work of a sonic explorer whose music can both challenge and caress. Those looking for other worlds of sound can put on headphones and find them here.” - Craig Anderton